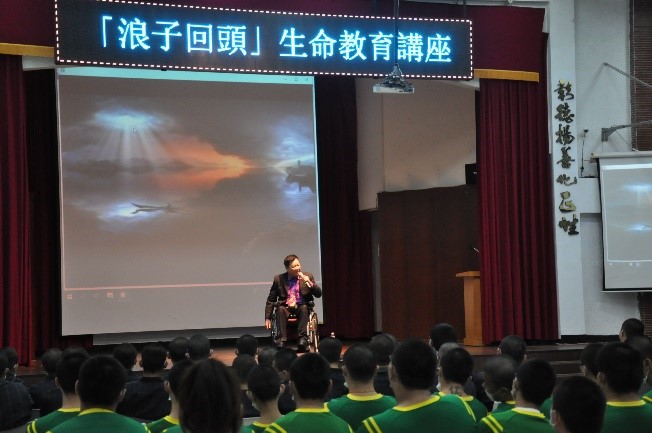 In order to help students develop a correct outlook on life, establish a good life attitude, and enhance self-confidence, the branch school invited poetry creator Lin Hecheng to the school on the afternoon of December 11, 2020 to conduct a "Prodigal Son Turning Back" life education lecture, totaling 79 students participate.
The lecture stated that he was adopted by a wealthy family since he was a child. When he learned that his biological mother was engaged in a special industry and was teased by his classmates, he began to fight back with violence, coupled with good athletic cells, and gradually became a school bully, skipping school, smoking and fighting, and was dropped out of school. After leaving school, he joined the underworld, fighting fiercely with swords and guns all day long. Fortunately, at the age of 20, he left the underworld as a soldier. Unexpectedly, before leaving the army, his girlfriend who was married died unexpectedly. After leaving the army, he was attacked by a close friend and paralyzed his lower body. Meeting two strange grandma changed his life. He said that in the first few years of his paralysis, he was thinking about how to get revenge every day. He wanted to "pay a tooth for a tooth and get it back." Through faith, he learned that only by "forgiving" others can he let go of the invisible burden in his heart.
In addition to sharing the life course, the lecture also sang his own songs to accompany and inspire the students in the audience. Finally, he encouraged the students to "seize the good time and concentrate on studying, obey the school rules, rethink and plan for the future, and aspire to be an honest and warm person."
※The unit and phone number of this event: 886-4-8742111 extension 417